A three-month pilot foot pulse-checking project aimed at increasing the diagnosis of Atrial Fibrillation (AF) identified a number of patients with previously undiagnosed AF. The work was conducted by County Durham and Darlington NHS Foundation Trust and has been part of a wider AF Programme run by the Academic Health Science Network for the North East and North Cumbria (AHSN NENC) in conjunction with the Northern England Clinical Networks. It aims to reduce the number of strokes and deaths in the region by treating AF as early as possible. 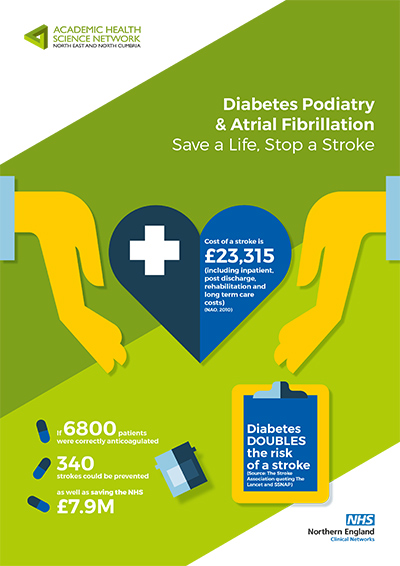 Atrial fibrillation: medicines to help reduce your risk of a stroke – what are the ...
Read More

This clinical pathway has been prepared to support providers, public health commissioners and ...
Read More

The BMS-Pfizer Alliance has partnered with the network of AHSNs to provide independent grant ...
Read More

This card deck has multiple cards on diagnosing AF and Non-Valvular AF related stroke risk ...
Read More
This site is intended for Healthcare Professionals only

If you are not a healthcare professional, please Click Here

I am a Healthcare Professional