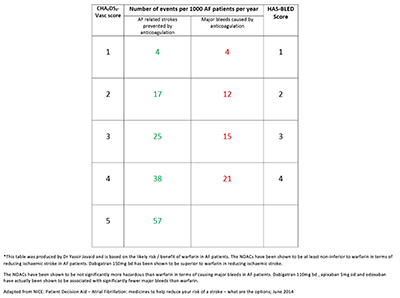 The core template is a comprehensive guide designed to help you assess and inform patients with atrial fibrillation about the risks and benefits of anticoagulation.
Read More

This resource will allow you to produce a specific risk sheet for your patient based on their ...
Read More

GRASP-AF is a free, easy-to-use tool that assists GP practices to interrogate their clinical ...
Read More

The Atrial Fibrillation High Impact Intervention Tool is an interactive dashboard that aims to ...
Read More
This site is intended for Healthcare Professionals only

If you are not a healthcare professional, please Click Here

I am a Healthcare Professional